Dry-cured ham is immensely popular around the world. The Italians have their Prosciutto and the French their Jambon de Vendée. The Spanish dry-cured ham, though, is on another level. The Iberian country’s dry climate is ideal for curing meat.

In Spain, cured ham is more than a culinary tradition, but a real treat to enjoy with friends and family around the table. It’s part of people’s lifestyles, and it’s easy to see why. There’s nothing as flavorful and palate coating as a thin slice of Jamon Iberico. 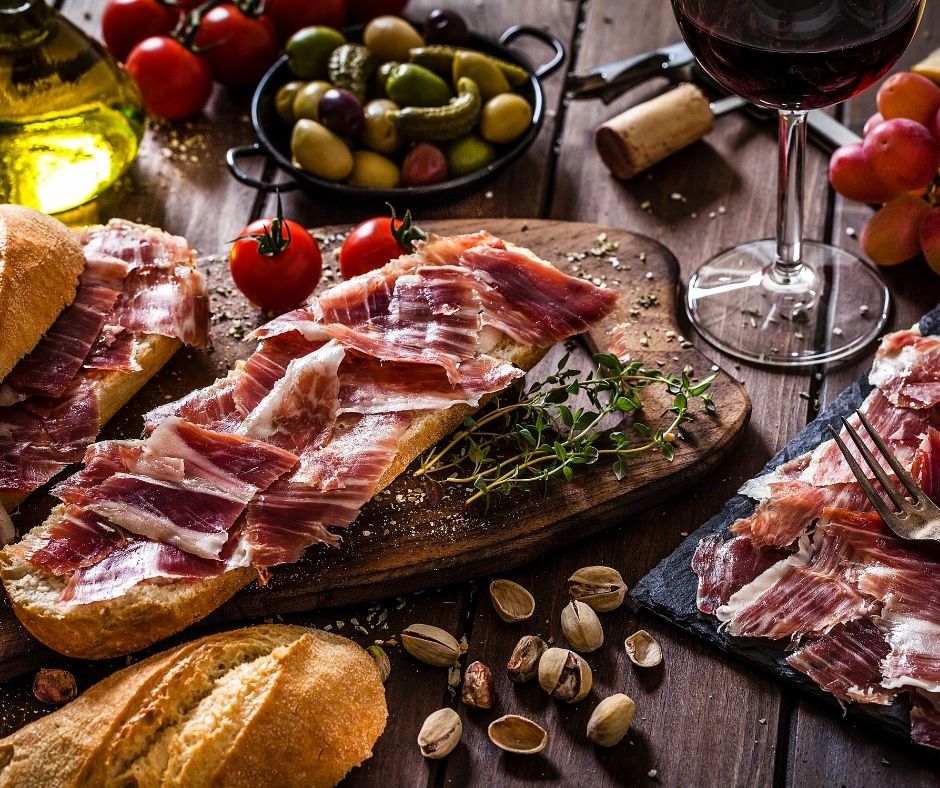 Of course, not all Spanish ham is created equal. While all of it is good, some are great! Here’s all you need to know about this authentic delicacy. The secrets behind one of the most cherished cured meats on the planet. This is your quick guide to Spanish Jamon Iberico or Iberico Ham.

What is Jamon Iberico?

Spain is no stranger to delicious food and drinks. The country’s Tempranillo wine is legendary, and let’s not even get started with their delicious piquillo peppers, grilled octopus or paella. Still, the single most exclusive and delectable item in Spain’s culinary repertoire is dry-cured ham.

Spanish ham is typically known as Jamon Serrano since it is dry cured under the blistering sun and freshened by the gentle breeze running through the country’s hills or ‘sierras.’

The ham from the hills — that’s what Jamon serrano means in the strictest sense of the word.

The word jamón means ham, and it’s mainly used when talking about the pigs’ back legs, which are meatier. Ham obtained from the pig’s front legs is called paleta, and since the pieces are smaller, they’re cured for shorter periods. They also have lower yields but are astounding pieces of cured meat! 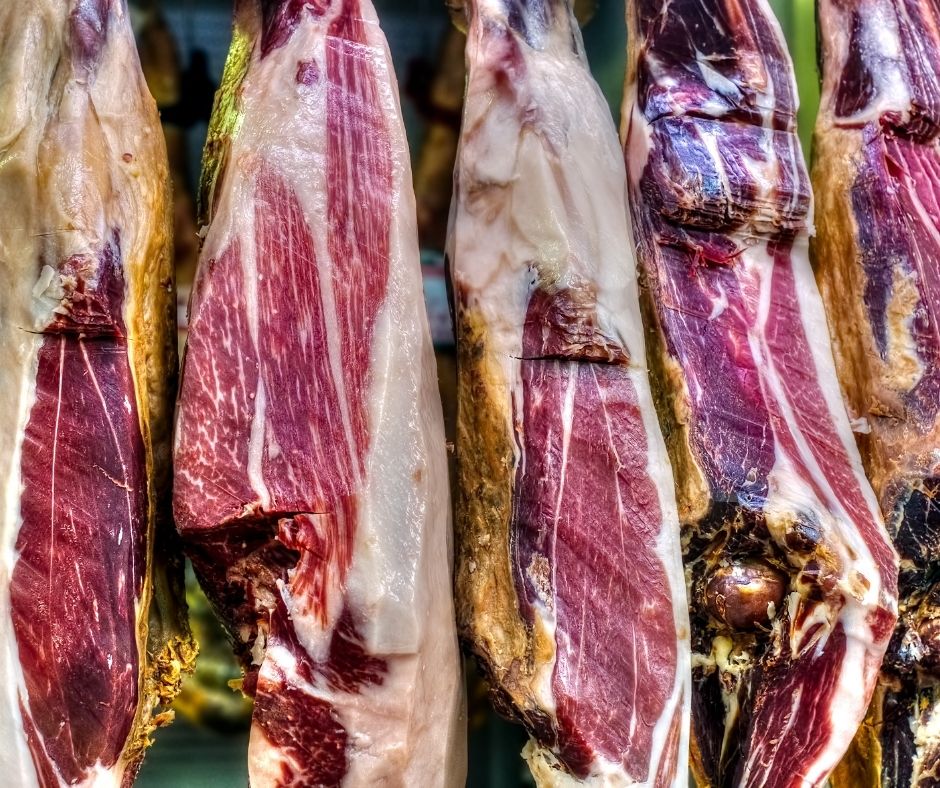 It comes without saying curing ham is a Spanish tradition going back thousands of years. Before modern food preserving methods and refrigeration, dry curing the meat was one of only few ways of preserving it for winter.

Let’s talk about how the Jamon Iberico is made, but first, let’s meet the stars of the show, the pigs!

The most prized Spanish pigs are purebreds, and they’re called Iberico Pigs. These furry, brown hogs have evolved through the ages in Spain’s arid lands to produce succulent, fatty meat ideal for curing in the country’s highlands.

With time, other pigs arrived in Spain, including the ubiquitous Duroc, Pietrain, Landrace and Large White. These pigs are all right.

Actually, we eat them every day in hotdogs and regular ham, but they’re not suitable for premium dry-cured ham making.

The easiest way of distinguishing premium Iberico Ham from regular Serrano ham is by looking at the pig’s race on the label. Only 7% of Spanish ham is made with dark-skinned Iberico hogs; the rest is made with the lesser white pigs. 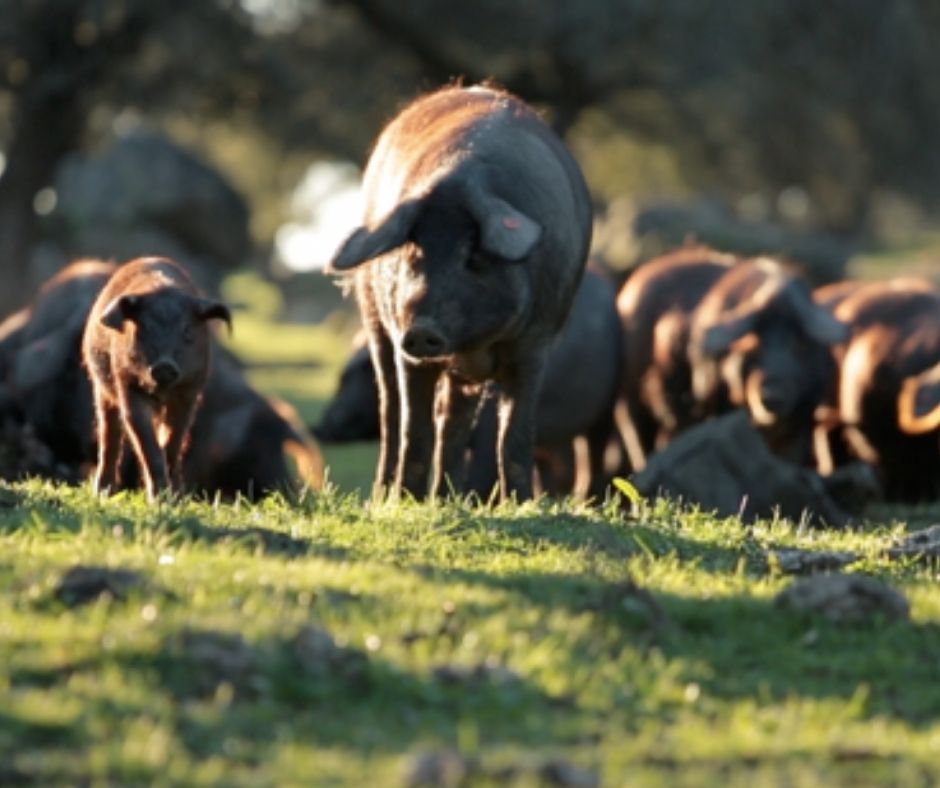 How is Jamon Iberico Made?

As with all premium agricultural products, it all starts in the fields. Iberico Ham comes from authentic Iberian pigs, but their feed determines the ham’s final quality and flavor.

After growing in comfortable conditions, the pigs spend their last couple of months free-roaming under the shade of acorn trees in Spain’s Dehesas or flatlands. Those who feed exclusively in acorns are the most prized and become Jamon Iberico de Bellota. Others feed on acorns and mixed grains provided by the farmers, but we’ll get there.

When the pigs weigh between 202 and 253 pounds, they’re processed and classified according to their weight, race and diet. The loin and both the front and back legs are salt-cured, washed, dried and aged in a process that lasts between 600 and 730 days! That’s up to two years.

The loin, front and back legs are carefully treated during the long process, always supervised by government officials.

The attention to detail is why jamón-lovers can’t get enough of the delicacy; it never disappoints!

To better enjoy Iberian ham, it is best to know the distinct quality labels, which, luckily, are easy to identify by color.

Types of Jamon Iberico and their differences

Once the ham is ready to hit the market, it is marked with one of the following tags.

Traceability matters too. The colored tags in Iberico products allow customers, authorities and producers to trace the ham back to the pig, how and where it was fed, its diet and even race purity.

Added to that, the European Union recognizes and protects five appellations of origin (DOP) or ‘Denominaciones’ for the highest quality products:

Although all ham might look similarly at first sight, each has a unique personality. Making artisan ham is not only a tradition and an act of love but a way to show what the French call terroir — the ‘sense of place’ from where such highly pleasing delicacies come from. Iberian ham will undoubtedly bring a smile to your face.

How to Enjoy Iberian Ham?

Now that you know the intricacies of Spanish ham, it’s time to enjoy it. The first thing you must do is find a reputable gourmet supplier offering authentic Iberian ham. Most of the ham you see in the market, and most of the one served in restaurants, is Serrano ham and not truly the Iberian delicacy.

You must also recognize reputable producers, from which few are as respected as Cinco Jotas. In the Jabugo DOP, this acclaimed ham producer has been making premium ham since 1879 and has mastered the craftsmanship behind selecting, salt-curing, and maturing ham for generations.

Enjoy Iberian ham on its own as a delightful appetizer. Pair it with artisan bread, semi-hard cheese, fruit or vegetables. Iberico has incredible versatility at the table, and it’s best enjoyed in good company. 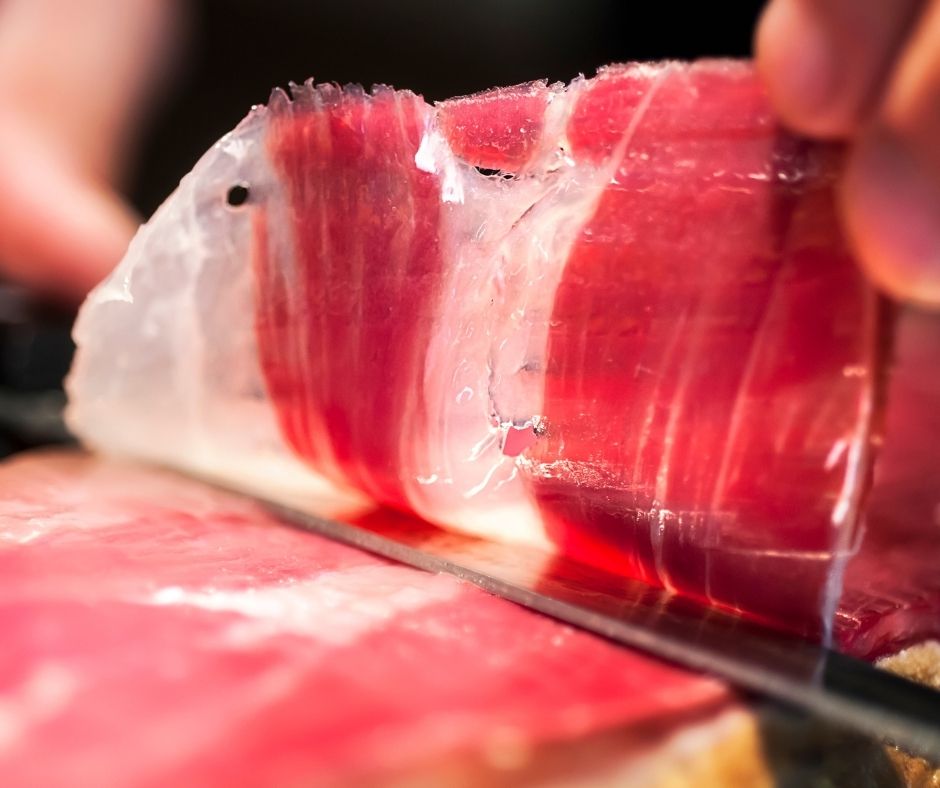