This item requires fast shipping to ensure it arrives in perfect condition. This item does not qualify for free shipping promotion. See Full Shipping details

This delicacy includes 1.5 ounces of sliced gourmet iberico ham sourced from the shoulders of pigs raised free-range in Spain and fed an acord diet.

Cinco Jotas is synonymous of exquisite food. It represents an aromatic flavor and an intense capability to fall in love with the most discerning of gourmet tastes. This shoulder cut will be an essential element of your cuisine and the highlight of your selection of appetizers.

Jamón is the Spanish word for ham.

Iberian ham, or Jamón Ibérico, is the most famous Spanish ham. It is made from the rear leg of the black Iberian pig, a rare breed that can be found in the southern and western regions of Spain and Portugal. It is considered one of the most expensive meats in the world. A leg of Ibérico can cost as much as $4,500.

Because of its intense flavor, the Spanish ham is preferable to eat it on its own. Still, it is usually accompanied by bread, cheese, fruit, and vegetables. Explore recipes with Iberico ham.

Ibérico ham is mainly produced in Spain. It’s not made from “normal” pigs but from Iberian pork. In contrast, Italian prosciutto is an uncooked, unsmoked, and dry-cured ham. Prosciutto is cured for a longer period and in the open air. Although there are many ways of doing it. Also, a pig’s feeding is important for the final result; for example, in some regions of Italy they are fed with Parmigiano Reggiano cheese whey.In general, Spanish ham is more intense in flavor and prosciutto is lighter and less expensive.

Remove from refrigerator and open the package. After 15 minutes, separate the slices on a plate and serve at room temperature.

This product is perishable and requires fast shipping to ensure it arrives in perfect condition.

Please note: To avoid weekend transit, orders placed after 11AM PT / 2PM ET on Tuesday with 2-Day shipping, will ship on Monday of the following week. We do not deliver perisables to PO Boxes.

Artichokes with strips of ham recipe 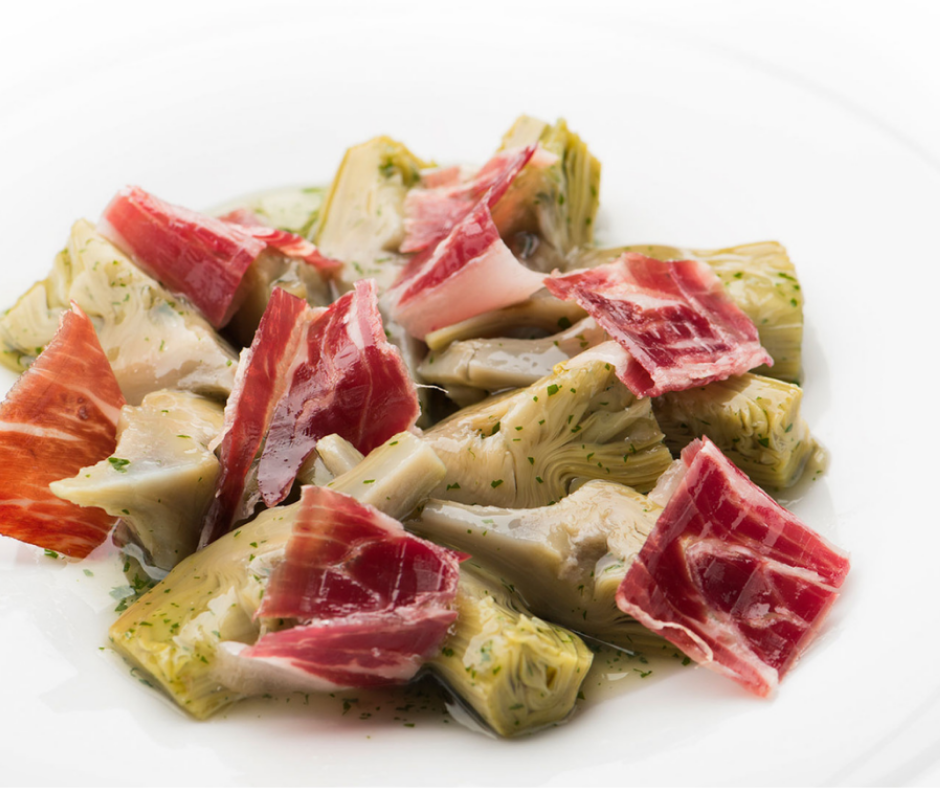 • 40ml drained water from the artichokes

For the sauce, add olive oil and chopped garlic to a saucepan. Once the garlic begins to brown, add the flour until dissolved. Add the artichoke water and stir until the sauce is smooth. Add salt to taste.

Dip in the artichoke quarters.

SKU:
5J-001
UPC:
PERISHABLE:
Does not qualify for free shipping